Kolosej kinematografi Ltd is pleased to announce that the 41st AMF Bowling World Cup will be held in Ljubljana, Slovenia, from November 13th to 20th 2005.
The tournament will take place in the Gladiator Bowling Centre, a brand new 28-lane facility scheduled to open in April 2005. The centre is part of a leisure complex owned and operated by Kolosej Kinematografi Ltd, one of the biggest companies in Slovenia and AMF's key partner for the 41st AMF Bowling World Cup. Kolosej is part of the KD Group. The Gladiator Centre is the second bowling centre Kolosej owns and operates in Slovenia.

Slovenia is bordered by Italy, Austria, Hungary and Croatia, with nearly 50km (30 miles) of coastline on the Adriatic. It is regarded by many as a bridge between eastern and western Europe. Slovenia is one of the newest members of the European Union having joined in May last year. Tourism office log on to http://www.slovenia-tourism.si

Ljubljana is a city of 276,000 people with a proud history dating back 5000 years and a delight ful old town contrasting with modern buildings, all set against the backdrop of the Alps. It is a major centre for the arts and its university is internationally renowned, especially in sciences. To find out more about Ljubljana, log on to http://www.ljubljana-tourism.si

The official hotel for the event will be the Grand Hotel Union, set in the old city surrounded by cobbled streets and close to many amenities and restaurants. To find out more about the hotel please go to http://www.gh-union.si 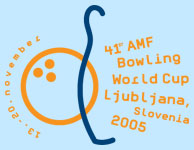 Slovenian bowlers first participated in the AMF Bowling World Cup in 2000. Last year Uros Kus achieved the best ever placing when he came 63rd, averaging 194 with a high game of 245. The Slovenian tournament to determine the participants in this year's event will take place at the Gladiator Lanes on 24th September 2005. The Slovenian Tenpin Bowling Federation was formed in 2000 and now boasts 6 clubs and over 100 members.

The AMF Bowling World Cup first took place in 1965 In Dublin Ireland, when 20 nations competed. It takes place in a different country every year, spanning the globe. Since 2000, the AMF Bowling World Cup has visited Lisbon (Portugal), Pattaya (Thailand), Riga (Latvia), Tegucigalpa (Honduras) and Singapore. For more information about the history of the event please see http://www.amfbowlingworldcup.com

The champions of 2004 in Singapore were Kai Virtanen of Finland and Shannon Pluhowsky of the USA. They will not automatically defend their titles as they will have to qualify again through the elimination tournament in their own countries.

In addition to the winners' trophies, special presentations are made to the top country, based on the finishing spots of the male and female bowlers, and for Sportsman and Sportswoman of the tournament. These latter are voted for by the bowlers themselves.

AMF Worldwide Inc, the founder and principal sponsor of the Bowling World Cup, is the world's largest owner and operator of bowling centres. AMF is also a leader in the manufacturing and marketing of bowling and billiards products. More information about AMF is available at http://www.amf.com